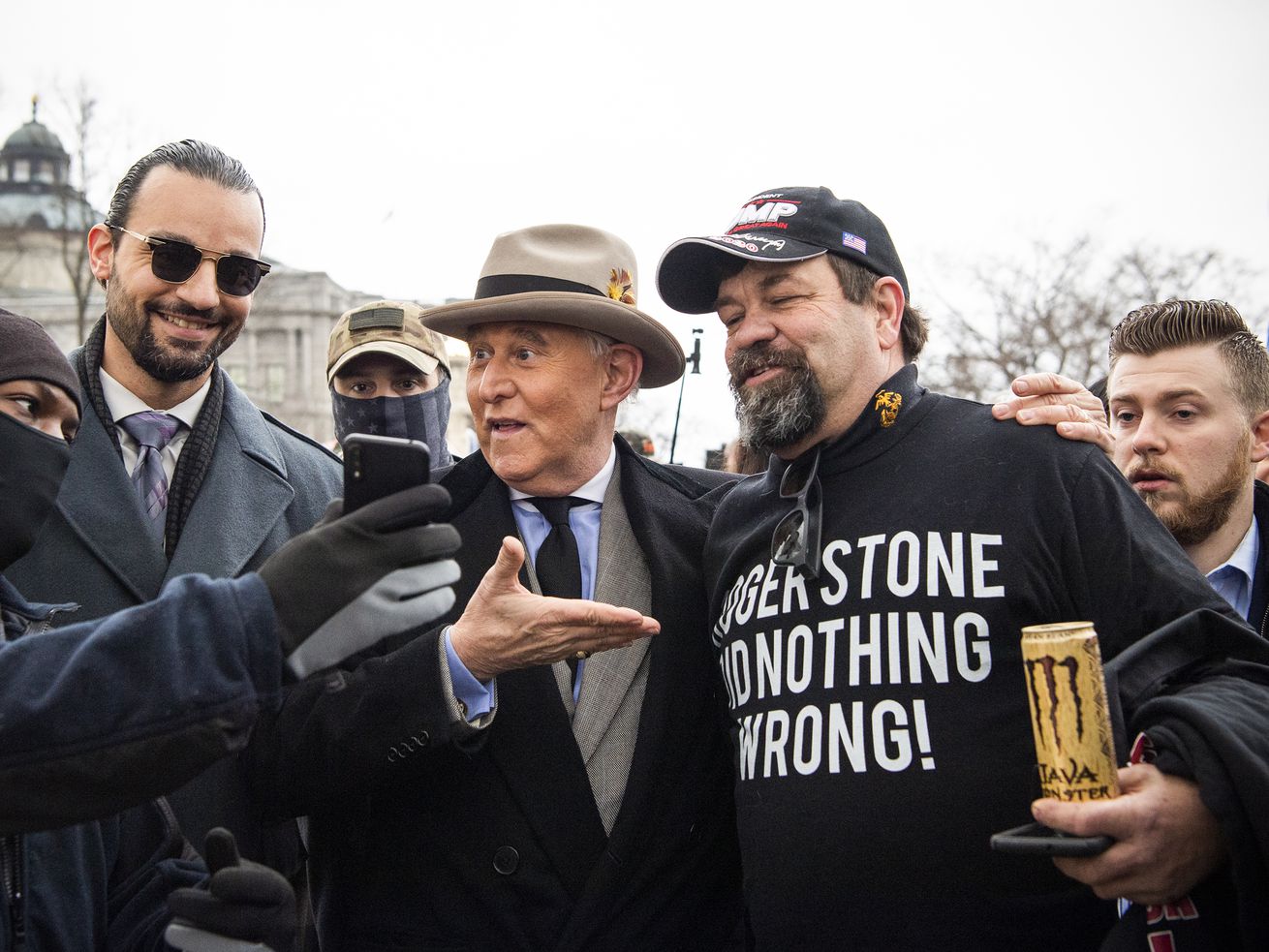 Roger Stone, former adviser to President Trump, stands next to a fan after speaking during a Trump supporters’ rally outside of the Supreme Court on January 5. | Caroline Brehman/CQ-Roll Call via Getty Images

They began with a speaker encouraging people to spread Covid-19. Really.

President Donald Trump is still refusing to concede the 2020 election to President-elect Joe Biden — and his most fervent supporters are on the same page.

As part of Trump’s last-ditch effort to overturn Biden’s victory, he and his supporters (in and out of Congress) have been hyping Congress’s expected certification of Biden’s Electoral College victory Wednesday as the final opportunity to “stop the steal.” Trump fans planned a slate of protests near the Capitol building in Washington, DC, starting with rallies on Tuesday. Yet another will take place on Wednesday, at which Trump himself says he will speak.

And they’re not off to a great start.

Trump fans began gathering on Tuesday in Freedom Plaza and outside the Capitol, where recently pardoned Trump ally Roger Stone spoke. At the Freedom Plaza event, a variety of fringe far-right speakers alternately profanely denounced antifa, said George Soros “owns” Supreme Court Justice John Roberts, described the coronavirus as “fake” — and, in one especially shocking moment, even encouraged rally attendees, who gathered mostly without masks despite the coronavirus pandemic, to hug each other.

From the livestream, it’s difficult to see how many (if any) rally-goers followed his advice.

“You need to pray for our vice president to look up to God and say, ‘I need to make a decision, Lord,’ and make the right decision for our country,” Lindell said, alluding to Mike Pence’s role overseeing Wednesday’s electoral college certification process. “You don’t have a [civil] war when the other side didn’t win anything … they were trying to steal it from us.”

MyPillow guy Mike Lindell: “You need to pray for our vice president to look up to God & say, ‘I need to make a decision, Lord,’ & make the right decision for our country…you don’t have a [civil] war when the other side didn’t win anything…they were trying to steal it from us” pic.twitter.com/s3NCSoqDya

And another speech Tuesday evening featured a “victory or death!” chant.

Far-right activist and “Stop the Steal” leader Ali Alexander in Freedom Plaza leads the crowd in a “Victory or death!” chant. pic.twitter.com/RW27eA8oh5

Trump has heavily promoted the Wednesday portion of the event, touting it on Twitter as a “BIG Protest Rally” that “could be the biggest event in Washington, DC, history” — one aimed at pressuring members of Congress to stop the “steal” of the election from him. On Tuesday afternoon, he tweeted that he plans to speak to his supporters at 11 am on Wednesday. In other tweets, he echoed the rhetoric speakers at the rally used by calling antifa “a Terrorist Organization” and cited the size of the gatherings to put pressure on Republican senators who so far have so far not joined his effort to overthrow the election.

I hope the Democrats, and even more importantly, the weak and ineffective RINO section of the Republican Party, are looking at the thousands of people pouring into D.C. They won’t stand for a landslide election victory to be stolen. @senatemajldr @JohnCornyn @SenJohnThune

Of course, the election was not stolen — the Trump campaign hasn’t produced any credible evidence of fraud, and court after court has rejected their claims — and with the legal process played out, there’s little Trump and his allies can do at this point to overturn the election results. The rallies on Tuesday and Wednesday ultimately are a step in the grieving process for Trump supporters who will soon have to adjust to life under President Biden, as well as a window into what a significant portion of the Republican base looks like post-Trump.

While Clark’s public encouragement of coronavirus spread is definitely problematic, it’s also important to note that people still have a right to peaceably assemble, even in cases where speakers spread blatant lies and anti-Semitic conspiracy theories. But authorities are worried that Wednesday’s pro-Trump rallies could turn out likes ones last month that culminated in violence.

During the most recent pro-Trump rallies in DC — which took place on December 12, two days before the Electoral College voted to officially make Biden president-elect — four people were stabbed during an altercation involving the Proud Boys, a far-right, racist, street-fighting group that was name-checked by Trump during one of the presidential debates. Authorities also say Proud Boys were responsible for burning a Black Lives Matter banner that hung outside the historically Black Metropolitan African Methodist Episcopal Church.

There are indications that the Proud Boys planned to take things a step further this time around. On the right-wing social media site Parler, group chairman Enrique Tarrio wrote last week that the Proud Boys “will turn out in record numbers on January 6th but this time with a twist” — wearing all-black so members can blend in with left-wing counterprotesters.

But Tarrio was arrested while traveling into DC on Monday on property destruction charges stemming from the alleged December church vandalism. Ominously, Tarrio was also charged with “possession of high-capacity ammunition feeding devices, which is a legal term for a magazine that allows guns to hold additional bullets,” the Washington Post reported, adding that “the devices were found during the arrest.”

In an effort to prevent violence, DC police banned all firearms in the vicinity of where the pro-Trump rallies are planned, and Mayor Muriel Bowser has urged residents to stay away from the area. Tess Owen of Vice reported that the arrest of Tarrio and perceptions that police aren’t standing with pro-Trump protesters have caused a bit of a schism between far-right agitators and the cops, with “Tarrio’s supporters and ardent Trump fans … putting the DC Police Department in their crosshairs” on right-wing social media sites. One Parler post even threatened to burn down a DC police precinct.

If the past is precedent, Trump is far more likely to pour fuel on the fire than he is to try and tamp things down, especially considering that things won’t go his way inside the Capitol on Wednesday. Ultimately, if the worst that happens is more reckless hugging during a pandemic, then DC authorities will chalk up Wednesday as a success.