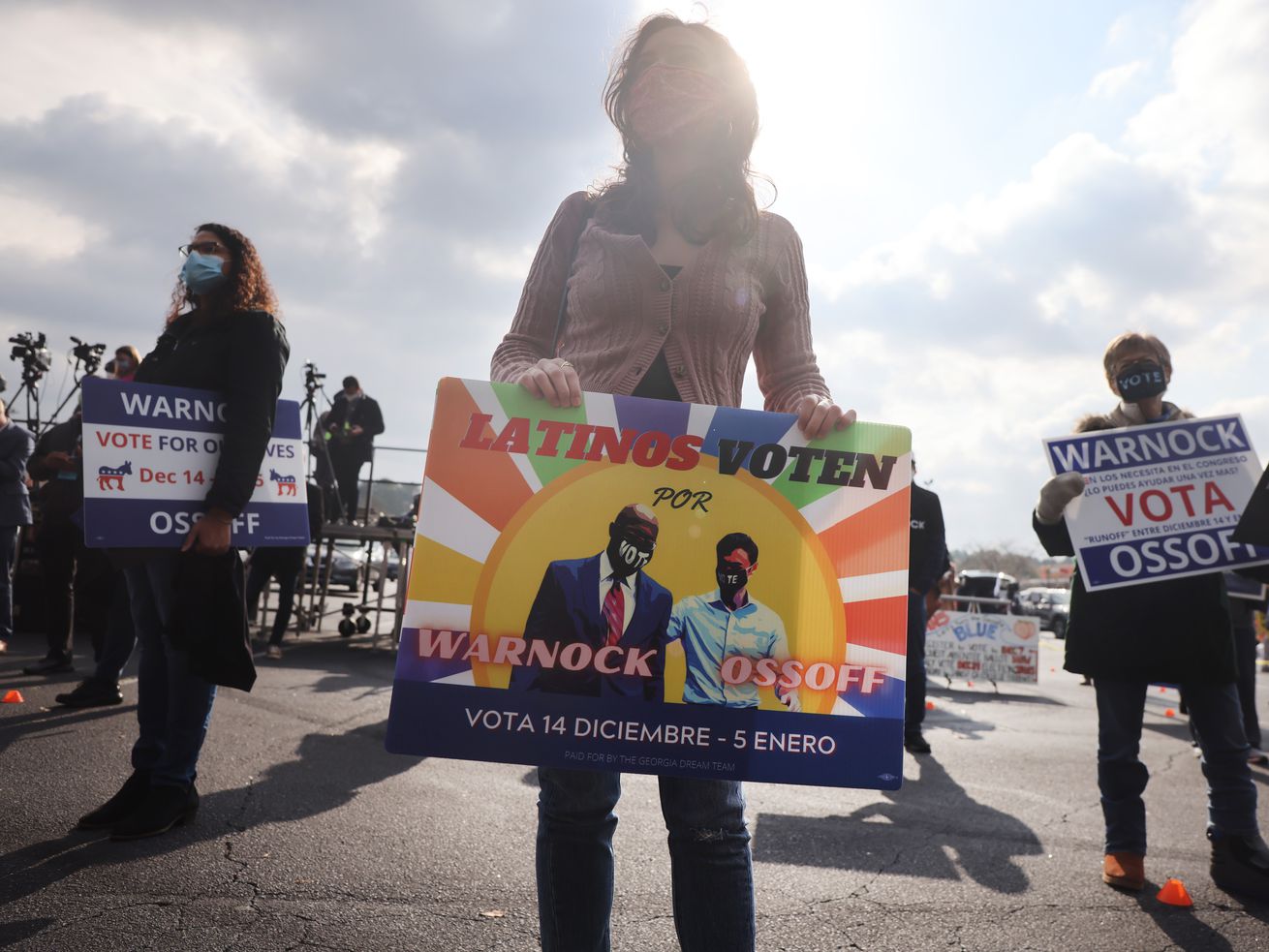 “We’re trying to normalize that Georgia is no longer black and white.”

The Georgia Senate runoff elections on January 5 will determine which party controls the Senate — and the future of President-elect Joe Biden’s agenda. Latino voters could represent an important, if overlooked, coalition in that race that could push the Democratic candidates over the edge.

Nearly 10 percent of the state’s population is Latino, and it is quickly growing, mostly on account of US-born Latinos who are the children of immigrants. Some 377,000 Latinos are eligible to vote, making up 5 percent of the potential electorate, and 270,000 are registered. About 37,000 have requested absentee ballots for the Senate runoffs. Given that the races will likely be decided by a razor-thin margin, their votes could make the difference.

The American Election Eve Poll from Latino Decisions suggested that a majority of Latino voters backed Democrat Jon Ossoff, who is challenging Republican Sen. David Perdue. And in a crowded field, a plurality supported Democrat Raphael Warnock over Republican Sen. Kelly Loeffler, who was appointed by the governor in December 2019 after her predecessor resigned.

Most polls underestimated GOP performance this cycle, so Democrats’ actual margins among Latinos may be smaller. Exit poll data also suggests that the Democratic candidates still had a significant edge among Latinos, though this kind of data is sometimes even less reliable.

Turnout among Latinos also seemed to up from 33 percent in 2016 to 42 percent in November, according to an analysis by Emory University professor Bernard Fraga and the left-leaning voter analysis firm Catalist. Turnout is typically lower for runoff elections, but with so much national attention on these races, Georgia already appears to be nearly matching turnout from November.

With all signs pointing to Latinos casting decisive votes in the runoffs, Democrats are amping up their outreach efforts. Former Democratic presidential candidate Julián Castro — the only Latino in the 2020 field — has campaigned with Ossoff. And national left-leaning Latino groups, including Mijente and grassroots organizations that have been working to mobilize Latino voters in Georgia for years, have been canvassing, sending mailers to Latino homes, texting hundreds of thousands of voters, and putting up billboards in places where there isn’t significant Spanish-language media penetration.

“We’re trying to normalize that Georgia is no longer black and white,” said Gigi Pedraza, executive director Latino Community Fund, one of the grassroots organizations working to turn out Latino voters in the state. “Georgia is home to a multicultural, multiethnic, multilingual community that’s young and vibrant and growing. It’s an asset for the state.”

The Latino electorate in Georgia presents a big opportunity for Democrats

Democrats are currently reevaluating their Latino outreach strategy in the wake of former Vice President Joe Biden’s underperformance among Latinos in Texas and Florida, both states where they make up a significant portion of the electorate, as compared to Hillary Clinton in 2016. But many of the factors that led to that erosion in Latino support — including a successful right-wing, Spanish-language disinformation campaign and a tradition of voting Republican — don’t exist to the same extent in Georgia.

Rather, the characteristics of the mostly Mexican Latino population in Georgia are favorable for Democrats. Latinos in the state are comparatively young: More than a third are under 18, and about 20,000 Georgia Latinos turn 18 every year, becoming eligible to vote. Their communities are also concentrated in the Atlanta metro area, particularly in Gwinnett and Cobb counties, which are Democratic strongholds.

What’s more, many of them have a connection to the immigrant experience and have consequently mobilized against the GOP’s restrictive stance on immigration, particularly in the Trump era. As of 2018, roughly 10 percent of Georgia residents were immigrants, many of them naturalized citizens, and 7 percent were native-born US citizens with at least one immigrant parent. Roughly 400,000 people are undocumented immigrants.

That shows in terms of Georgia Latinos’ political priorities: Immigration ranks third in importance after the US’s response to the pandemic and the economy, according to focus groups conducted by the Democratic PAC Nuestro PAC. By comparison, the issue never made the top five in any other state in the general election.

But while these voters got behind Democrats in the November election in Georgia, the biggest challenge for organizers is communicating why their community needs to show up again for the Senate runoffs.

Chuck Rocha, a former senior adviser on Sen. Bernie Sanders’s presidential campaign and the founder of Nuestro PAC, said he is focused on increasing Latino turnout, rather than persuading voters to change their minds.

“We’re learning that Latinos don’t understand why the hell they need to come back and vote again after they just finished voting less than a month ago,” he said. “They were voting against Donald Trump predominantly.”

His PAC is consequently running Spanish-language ads in the Atlanta media market explaining that control of the Senate hinges on these two runoffs and how voters can go about casting their ballot during early voting or on January 5.

But he worries the Democratic Party and other outside groups aren’t doing enough to reach out to Latino voters in the same way. They have invested heavily in improving canvassing and ground operations in Latino communities, and Warnock and Ossoff have been appearing on Spanish-language media and have hired campaign staff from the Latino community.

But Democrats have not put money toward advertising on Spanish-language media. The party and the donor infrastructure is spending $400 million on Georgia media, but none of that has gone to Latino organizations, Rocha said.

“This is a fatal mistake that Democrats can never learn to fix, which is Latinos listen to the TV, the radio, and get on the internet, just like white people. Why are you not investing in a multilayered approach?” he said. “We have to learn the lesson that ground operations is just one of the techniques that you use and an important technique to reach Latino voters.”

Latino organizers have been on the ground for years

Even Stacy Abrams has credited a robust network of Black, Asian, and Latino voting advocates who have been working to mobilize their communities for years with turning Georgia blue.

The success of the Latino organizers can be seen in this year’s election of two Democratic sheriffs in Gwinnett and Cobb counties, where Latinos are concentrated.

The election of these sheriffs, who made cutting ties with US Immigration and Customs Enforcement a central message of their campaigns, is considered a triumph for immigrant rights activists. They have promised to end longstanding agreements with the federal government — known as 287(g) agreements after the section of the Immigration and Nationality Act that created them — under which sheriffs can question people about their immigration status and detain them on immigration charges.

In Gwinnett County, Democrat Keybo Taylor, a police major, prevailed over Republican Chief Deputy Sheriff Lou Solis. The county’s 287(g) agreement had been used to refer more than 21,000 people in the county to ICE over the past decade, making it one of ICE’s biggest local law enforcement partners outside of counties on the US-Mexico border.

In Cobb County, Democrat Craig Owens, also a police major, ousted incumbent Republican Sheriff Neil Warren, who has held office for 17 years and was the first sheriff in the state to enter into a 287(g) agreement.

Latino advocates are continuing to invoke immigration as a means of energizing voters. The Georgia Association of Latino Elected Officials (GALEO), which has registered over 35,000 voters over the last couple of years, has pushed for a pathway to citizenship for the state’s undocumented immigrants. And in partnership with the Latino Community Fund of Georgia, the organization has fought for more protections for undocumented workers who face exploitative labor practices.

“We have always been here,” Pedraza said. “Don’t forget about us. Only folks that were outside Georgia were surprised [by the] runoff. We knew in Georgia all along, though, there was going to be a runoff.”

Latino advocates have focused their efforts on increasing turnout. But that task has been made more difficult by the closures of polling locations in the counties where Latinos tend to live, including Cobb County in the Atlanta metro area. Chatham, Forsyth, and Hall counties have also slashed polling locations.

Cobb County, which is 13 percent Hispanic or Latino, announced earlier this month that it was reducing the number of available locations for early voting in the Senate runoffs, which began on December 14. Instead of the 11 locations that were open during the general election in November, there would be just five, officials said. That’s despite the fact that there was record turnout in the county in November, leading lines at the polls that were up to 10 hours long.

Organizations including the American Civil Liberties Union of Georgia and the Georgia NAACP consequently warned that closing just more than half of the early voting locations would disproportionately harm Black and Latino communities.

“Georgia’s Black and Latinx residents are more likely to live in poverty than other residents and will have more difficulty traveling long distances to access advance voting locations, especially because of the limited public transportation options in Cobb County,” the organizations wrote in a letter earlier this month. “As a result, the elimination of advance voting locations will discourage or prevent many of Cobb County’s Black and Latinx voters from participating in the runoff election.”

As a result, the county agreed to move one site and add two more in the last week of early voting. But advocates have nevertheless reported that lines at the polls have been long, in some cases as high as two hours.

But getting to the polls is not the only obstacle Latinos face in casting their vote: Georgia has an “exact match” signature requirement, which requires that your name on your voter registration match what is on your driver’s license and what is on file with the Social Security Administration. But under that system, naturalized citizens are inaccurately flagged as non-citizens if they obtained a Georgia driver’s license prior to becoming citizens, often resulting in their voter registration applications being put on hold until they can prove their citizenship or even being canceled. GALEO has consequently sued.

“Officials that don’t like the outcome of what happened [in November] are trying to suppress the votes,” Jerry Gonzalez, GALEO’s chief executive officer, said in a press call. “It’s not by accident. It’s intentional. … They don’t want our communities to show up to vote. They’re afraid of our power.”