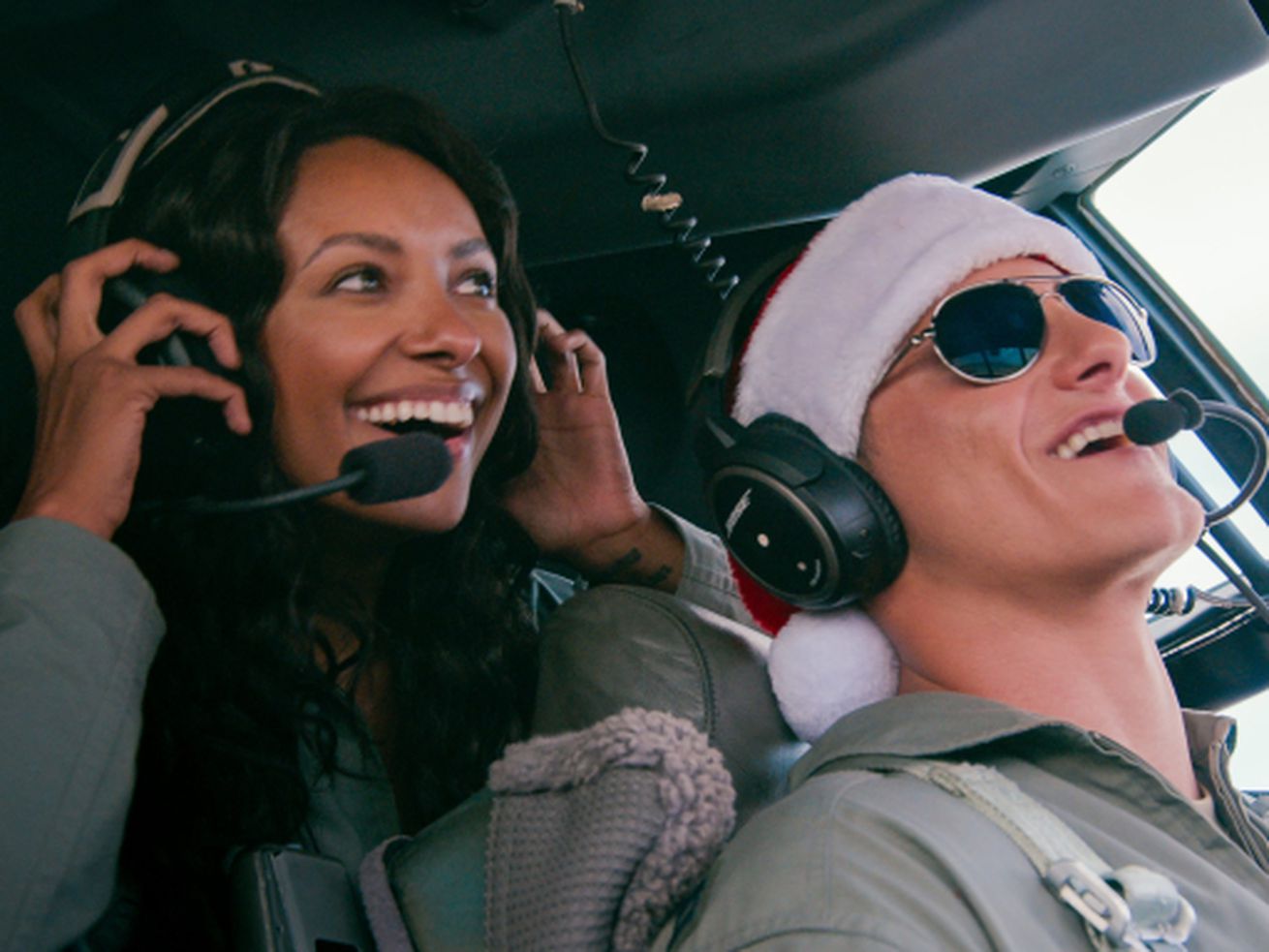 What to know before watching the Guam-set Operation Christmas Drop — from a local’s perspective.

The days leading up to Thanksgiving usually mean an onslaught of Christmas movies to binge-watch while sitting on the couch and sipping peppermint hot chocolate. So when Operation Christmas Drop, a movie set on a military base on Guam, dropped on Netflix, I received a text message from my enraged sister: “This was still released?! What?” in all caps.

See, my sister and I were born and raised on the island of Saipan in the Northern Mariana Islands, a United States territory just north of Guam, where the movie was filmed. Although we are not Indigenous Pacific Islanders, we were pretty disappointed when the movie started filming last year and are even more infuriated now with the result: It essentially ridicules and erases the culture of the Indigenous land and people that helped raise us.

Starring The Vampire Diaries’ Kat Graham and Hunger Games villain Alexander Ludwig, Operation Christmas Drop is a rom-com that follows a congressional assistant, played by Graham, who is deployed to investigate the US Air Force base on Guam. Her mission is to find a reason to recommend shutting down the base by accusing Operation Christmas Drop — a program where the military airdrops supplies and canned goods to the Micronesian Islands around the holidays — of misusing taxpayer funds. But her plan is stymied when she falls in love with Ludwig, an Air Force captain in charge of showing her around the island, who ultimately convinces her the base should remain open.

Operation Christmas Drop is a real Defense Department tradition that dates back to 1952. (Having spent most of my life on Saipan, I don’t think I’ve ever seen any of those goods actually dropped from the air.) But Netflix’s portrayal of the mission as a “life-changing” humanitarian event is infantilizing — Indigenous Pacific Islanders have survived for centuries pre-colonialism, coexisting with land and water. Before colonizers took their land away, they sourced their own food from plants, hunting in the island’s jungles, and fishing in the vast Pacific Ocean that is now tainted with military and industrial activities.

It’s not the only thing the film got wrong. It failed to show the vast development of buildings and bustling civilization on Guam. (The closest was showing islanders shop at a street market in Chamorro Village, a tourist spot.) Instead, the movie showcased Native islanders living in ancient huts that are, in reality, historically preserved tourist attractions.

Um @netflix Guam is not in the South Pacific *facepalm* pic.twitter.com/ESpJYHCN5l

But most of all, Operation Christmas Drop’s romanticization of the military’s presence in Guam, along with a heavy dose of the “white savior” narrative, feels out of place in an era when the grassroots movement to demilitarize the Marianas continues to grow. The truth is many local island residents have been critical of the growing US military presence in the Marianas. In 2005, the US signed an agreement with Japan to relocate thousands of Marines from Okinawa to Guam, due to public health and environmental concerns voiced by Okinawans. If they didn’t want the US military, why should local residents in Guam?

Today, the Pentagon holds roughly 30 percent of Guam’s land, a share that’s growing fast. A new Marine Corps Base, the first new base in nearly 70 years, just opened last month and would join Guam’s Andersen Air Force Base, naval bases, and new live-fire shooting ranges, most of which are located in uninhabited islands in the Marianas. The buildup of the new military base faced widespread protests from local residents. The criticisms got even worse when military excavations in the new Marine base revealed dozens of sites containing human remains and cultural artifacts. Indigenous residents were livid. It seems telling that the movie dropped on the heels of the ongoing military expansion on the island.

For Netflix to produce and release a film set against this backdrop that instead celebrates the growing militarization of the Pacific islands in the name of Christmas cheer couldn’t be more tone-deaf.

Many Pacific Islanders are not having it with this movie

During the film’s shooting in summer 2019, many local islanders on Guam and the Northern Marianas were already upset with the idea of romanticizing the military for a holiday movie. When Operation Christmas Drop was released on Netflix, islanders across the Marianas archipelago and several parts of the Pacific were even more appalled by the film’s portrayal of Guam’s Indigenous Chamorro people (also known as Chamorus) and their culture. Some took their frustration to Twitter, calling the movie “propaganda” for the US military.

In one particularly baffling scene, Graham’s and Ludwig’s characters visited what the movie portrayed to be a small island village that lacks resources such as electricity. Graham’s character feels pity for the local children, giving them a used hairbrush, some other accessories, and ultimately her entire bag. “You need it more than I do,” she said.

“This movie negatively represents Chamorros,” one native Chamorro resident on Guam said in a viral TikTok video. “It makes it seem like the military are our heroes, when in reality they’re thieves. They take away sacred land so they can build a shooting range and they lie to us about it. They don’t care about our concerns as locals and as Indigenous people here on Guam.”

Carlos Manalo, a longtime friend of mine who is also Chamorro, told me how disappointed he was with the film. The one time our culture is finally represented in the mainstream media, he said, it’s shown as “some kind of pity party needed for the main character to become less superficial.” The plot succeeded with the archetypal “white savior” trope seen in most Hollywood films.

“It was equal parts silly to me but ultimately just sad seeing Chamorros wear grass skirts and living in ancient huts in the film, because it inaccurately shows how developed we are since the ’50s,” he told me. “If locals want to watch a holiday movie with your culture inaccurately seen, then … best wait another 50 years.”

One of our mutual friends, Maria Atalig, also Chamorro, also voiced her frustration. She was especially angry after someone she knew, a white person stationed on the Guam Air Force base, talked up the movie. On the internet, there has been plenty of praise, too: BuzzFeed published a listicle of tweets celebrating the movie. “The caucacity,” she said.

“Do they not realize the history of the islands they’re shooting this on?” she added. “They’re really out here making it seem like Guam, one of the most developed islands there, is still stuck in the past with no electricity.”

disappointing that Guam is rarely ever portrayed in big media so when we actually are, no matter how inaccurate or rude it is, some people will applaud the creators

Guam residents are US citizens with limited rights

Probably the saddest part is that a number of mainland Americans, after tuning in for a night of mindless holiday cheer, will come away with Operation Christmas Drop as their primary impression of the Pacific Islands.

In the movie, a Congress member, played by actress Virginia Madsen, poses the question, “How does this [Operation Christmas Drop] benefit Americans?” It’s a thoughtless line of dialogue. Anyone born in Guam and the Northern Mariana Islands is a US citizen. But despite US citizenship, residents of Guam and the Northern Mariana Islands cannot vote for president. They can get American passports but lack full constitutional rights.

They can elect a member of Congress, but that delegate cannot vote on the floor, only make suggestions. Guam residents enlist and die serving the military at the highest rate per capita. Yet when it comes to helping Guam veterans who have been historically exposed to toxic chemicals such as Agent Orange and radioactive materials, Veterans Affairs provides little to no help to these residents. This isn’t new for the military, which has often treated its territories in the Pacific with negligence on human rights, seizing Indigenous lands and ignoring calls for justice.

Then there’s the environmental aspect. Guam, the Northern Mariana Islands, and other islands in the Pacific are on the front lines of the climate crisis. The military planes running on fossil fuels only pollute the air local islanders breathe. The fact that the US military is one of the biggest greenhouse gas emitters on the planet is not lost on local activists.

Samantha Barnett, an outspoken activist in the movement to demilitarize Guam, told me Operation Christmas Drop not only erases Chamorro culture and history but also promotes the military contamination of our islands.

As a #Micronesian this is a particularly painful image. nuclear radiation lingering in our bodies and lands across archipelagos and here we are painted as happy natives. #OperationChristmasDrop #beingmicronesian pic.twitter.com/R4kNcv2eT9

“The film presents us as helpless and dependent on the US military, but in reality the military has stolen our land and continues to poison our environment without our consent,” said Barnett, who has represented Guam as a delegate to the United Nations, fighting for the return of Indigenous lands, demilitarization, and climate justice.

She added, “No amount of canned foods and reused items dropped from planes can make up for the US military occupying our island, dispossessing Chamorus from our land, and poisoning our water for their war games.”

Part of what stings about this movie is that pro-military propaganda is alive and well in these US territories. Military presence was unfortunately natural to me growing up in Saipan. In high school, I joined the Junior Reserve Officer Training Corps program. (It was a prerequisite choice of JROTC or Physical Education II, which involved dreadful campus runs every day.)

There were more military recruiters than college recruiters at our public high schools. It wasn’t until college when I moved to the mainland in Portland, Oregon, that I became more aware of how all-encompassing their presence was. Watching this movie and thinking about the historical legacies of violence and injustice the US military brought to my home islands was infuriating.

So the next time you decide to watch a holiday movie, please reconsider putting Operation Christmas Drop on the list — or at the very least, learn the history of US colonialism and militarization in the Pacific before diving into a movie that disrespects an Indigenous culture.

Source: The real love interest in Netflix’s Operation Christmas Drop is the US military